I was born in the camps 22 years ago. Life was hard. I have two older brothers, and one more and a sister were born after me. My father struggled very hard to provide for us, but work was hard to find. Sometimes, often, there was not enough food for all of us to eat. Then my mother would put the food on the table, and she and my sister would go into the other room and pretend to eat, though I knew there was no food there for them.

Our home was a very poor affair, a small house, more of a hut, made from scraps of building materials my brothers and I could take at night from nearby construction sites. But it was our home.

I was very lucky. I was always the smart one in the family. My father, a very devout man, visited the Mosque every day for ablutions and prayers. I often went with him, from the time I was a very small boy. I love the Q’uran, and learned it quickly. I am very devout, and the Mullah noticed this, Praise be to Allah. He took special notice of me, and allowed me to go to school at the madrassa. I learned much there.

I learned that Allah is great, and all is the will of Allah. En sh’Allah, Allah willing, all the peoples of the world can become the instruments of Allah’s plan for this world, in preparation for entry to Paradise in the next.

I learned that the Great Prophet Muhammed, may his name be praised, revealed to us His plan in the Q’uran as to how we should prepare for that day. That we should convert all Infidels to Islam. That those of The Book should be allowed full conversion, and the rest allowed a form of generous accommodation. As long as they acknowledge Allah as the one true god.

We must remain chaste, especially our women; sisters, mothers, daughters. Chastity is good, and the men of the family are honor bound to enforce this virtue.

We must pray five times each day, facing Mecca. The M’uzzin shall make their call to remind us, and we must heed their call.

But at the madrassa and the Mosque, I also learned some things that disturbed me very much. I learned that the reason why I, and my father before me, could not find work to provide for the family is that the Jews and the Americans conspire to keep us poor. They wish to control all the Middle East, and its oil. They wish to make the Faith and the Imams and Mullahs weak, by imposing “democracy”, in which any person, regardless of how faithful they are or are not, shall have the same voice as the Faithful. And this includes women! They would give women the same voice as men! Even in the Mosque, where all are equal in the eyes of Allah, women sit in an area away from the men. This “democracy” would put all together. This is heresy!

In my final year at the madrassa I was honored to be chosen, with a very few others deemed as true believers and good students, for special instruction. We were introduced to the Imam. We pursued further, special studies. We were shown videotapes, taken right from the Infidels’ own television stations in America and Europe, showing how degraded their culture truly is. I was shocked at what I saw, and felt the sin of even watching such evil and debasement.

I was shown videos from the television news shows in the West, films that showed how greedy the Infidels are, with their big cars and big houses, the souks they call “malls” with wasteful and shameful things for purchase. The Imam instructed us that the only reason the Infidels can afford such shameful, sinful luxury is by stealing the wealth of our homelands. Their greedy companies make dishonest deals taking advantage of the owners of the oil, to make unfair profits. The Jews keep the Arab brothers at each other’s throats through their lies, then steal when they are distracted. They make their bread for their religious days from the blood of the young Faithful. I learned of how the Jews plan to conquer all the lands of the Faithful. It was all in a book called The Protocols of the Elders of Zion, written by the Jews and Zionists themselves. It was truly frightening.

I saw movies that showed the actors, men and women together, the women shamefully exposed. Even movies with the people doing the forbidden act, which is only for man and woman when married. Imagine! In a movie! It is beyond shameful, beyond sinful! The people who would do these things are no better than animals, pigs rutting in the mud.

It is with shame that I have to confess that when I saw these things, my body betrayed me. I could not arise from my seat because my shame was so obvious, but the Imam, in his kindness, Allah be praised, put his hand on my shoulder and told me he understood. That the shame was for the people who would do these disgusting things in front of a camera. He made me understand that the shame is not in the act itself, because it is right for a married man and woman who wish to have children. And it is also right as a reward in Paradise for those who are martyrs to Jihad. That Allah, in His wisdom, has reserved virgins for those who become martyrs to Jihad, and all is right.

I have chosen the path to fight for Jihad, and if Allah is willing, to become a martyr for Jihad. I have taken special instruction in how to do this. Tomorrow is my day.

Do not forget me. My name is Hassan.

(I originally wrote this essay, and published it at my blog on Townhall.com, back in 2007. In light of recent events, I thought it timely to republish it here and now)

In light of everything that’s been going on in the Middle East and North Africa over the last week, I have to comment.

First of all, as those who know me or have read my scribbling over the years are aware, I’ve long maintained that the idea of a Western-style democracy successfully taking hold in the Muslim/Arab world is a pipe dream.

There are no cultural underpinnings to support such an enterprise, and in fact their cultural and religious foundations are antithetical to the concept.

Over the years I’ve written several essays on the subject, and you can read them here, here,  here, and here.

Our country suffers from two deadly weaknesses in our approach to the problems in the region. The first is that, with the exception of Reagan, no one inside the Beltway in post-Vietnam history has had Clue One about how the Arab/Muslim mind works. They think, in spite of all the historical evidence to the contrary, that the prevailing mindset is no different from our own. I think you actually have to have lived in the region to realize how wrong that idea really is. I spent my high school years in Iran, and I can’t imagine a more foolish concept.

The second weakness is our dependence on oil from the region. Unquestionably, that limits our options, and forces us into “alliances” that are contrary to our own national self-interests. A perfect example is our relationship with Saudi Arabia. Though that country is perhaps less anti-Western than others, they’re certainly not our friends in the way that a country like the UK is, for example. We’re simply a market for their product: oil. They’re still the source for international Wahabiism, and terrorists such as bin Laden draw much of their financial support from sources within that country. Don’t fool yourselves; they’re not our allies in the real sense of the word.

Which brings us to Obama. Obama is the “perfect storm” of ignorance of the region coupled with stupidly utopian idealism coupled with a refusal to take any realistic actions to lessen our dependence on oil from the region. A disastrous trifecta of insane policy.

As I’ve said before (here, here and here) we’re sitting on an ocean of oil we’re just letting sit in the ground purely for political reasons. We have more known and recoverable oil than any other nation on the planet; three times as much as Saudi Arabia. The solution to our “energy dependence” problem is very simple: Drill, baby, drill!

But we can’t do that because the amateur in the Oval Office won’t allow it. The pump price of gasoline has doubled since Obama took office, but he’s stuck on stupid when it comes to oil, and would rather hitch his wagon to fantasies about “alternative energies” that don’t even exist at this point in time, rather than actually address the problem with the obvious and easy solutions that already do exist.

All we have to do is drill our own oil to free us from having to worry about the actions being taken by Muslim extremists who seem to spend their whole lives being “offended” by everything under the sun. We could simply flip them off and have done with it.

And just exactly what are the policies being implemented by Obama in the Muslim/Arab world? They’re a repeat of the exact same policies that worked so well under “Peanut Jimmy” Carter! Remember those good old days?

Carter proved how “tough” he was by engineering the downfall of the Shah of Iran, and his replacement by Ayatollah Khomeini, 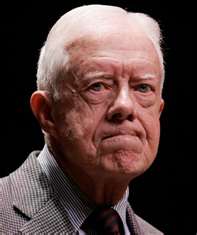 and look how well that turned out. Obama proved how tough he was by “killing bin Laden” and facilitating the “Arab Spring”, and look how well that’s turning out. Obama is Carter Redux. Worse, actually, because he’s refused to learn the lessons of history, and is repeating the same stupid actions that have already proven to be disastrous in the past.

If we insist on remaining engaged with the Arab/Muslim world, we have to do so from a position of unyielding strength and pragmatism that isn’t filtered through rose-colored lenses that project a vision of Western values that doesn’t exist in the region. We have to use our aid dollars as both a carrot and a stick. We have to find some pro-Western strongmen, and back them. Maybe over time a foundation can be laid that will allow Western-style democracies to develop there, but the key words are “over time”. A long time, probably generations at least.

At this time, we’re viewed in the Muslim/Arab world as being paper tigers; easy and impotent targets that never respond to provocation. In that world, that’s fatal. Until we learn that lesson and act accordingly, attacks against our interests and outposts will continue. It’s just that simple.

These are all lessons that are clear to see. Obama has proven to be an epic failure in this arena. His response has been to thrash around impotently, throwing blame hither and yon, then promptly getting back to the only activity he’s reliably pursued throughout his presidency (other than playing golf), campaigning for re-election. The current debacle in the region doesn’t seem to interest him as anything more important than just a minor campaign delay.