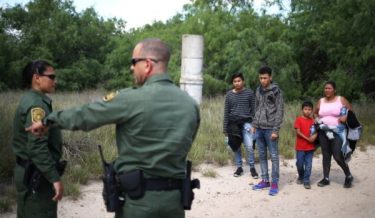 The latest outrage du jour from the left is the separation of the children of illegal aliens from their parents if those adults are put into detention after being caught sneaking across the border.

Is it sad? Of course it is. No one likes the idea of kids being separated from their parents. But who’s actually responsible for it occurring?

When parents are arrested for other crimes – let’s say embezzlement, for the sake of discussion – what happens to their kids when the parents are locked up? Are the kids sent to jail, too, so that they’re not “taken away” from their parents? Of course not. The idea’s frankly absurd.

Those kids are placed in some form of foster care pending the outcome of the legal proceedings, and any incarceration that might follow. That’s exactly what takes place with the kids of these illegal aliens: the kids are placed in the care of agencies whose function is to take care of them.

This policy and practice isn’t “Trump’s fault”, though the left and the Never Trumpers seem to relish trying to make that argument. It’s the law, plain and simple, and it’s also good practice as far as the welfare of the kids goes, considering the circumstances.

Just like the hypothetical embezzlers I mentioned above, the illegal alien parents made the decision to break the law and cross the border illegally. That’s indisputable. Therefore, if anyone’s at fault for their kids being taken away and put into foster or institutional care, it’s the parents themselves.

What are the alternatives being proposed by those who oppose this practice? As far as I can tell, the silence is pretty deafening, other than some vague idea that Trump must “do something” to change this practice. But do what?

The law requires this practice. So is Trump supposed to ignore the law? We all know that Obama did that all the time, legislating by fiat with his “pen and a phone”, but that certainly doesn’t make it proper or legal. Trump isn’t Obama (thank God).

Is this yet another emotional hook the illegal alien lobby can hang their open borders agenda on? You bet it is. The American left and the cheap labor advocates, along with the Never Trumpers, are tugging the heartstrings of the country, hoping to advance their cause.

The net effect would be to once again turn illegal aliens into even more of a special class that’s immune to the regular order of law, granting them more special privileges that don’t apply to American citizens, such as our embezzlers. Let’s be honest here. The real, though unstated, goal of all this noise is to stop the practice altogether of detaining border jumpers.

If people want this practice to end, the proper way to do that is to enact some legislation to that effect. Unless and until that happens, current law defines the practice.

(Also published today in  The Signal)